In the year 2000, I had a lady from our investor company on the phone. She was not happy that we did not reach our target sales numbers. After fretting for a while, towards the end of the call I asked her: So how did you like the call? Even before she could answer I told her that the phone call was done using our VoIP phone, and this was not a regular TDN phone call. She had to admit that the phone call did not sound any worse than a good old phone call and that VoIP actually seemed to have a future worth being invested in. I guess that question saved us from her pulling the plug on us.
Anyway, the user experience about how a phone call was is quite important in VoIP land. Skype regularly explicitly asks users for their feedback about the call quality after a phone call. But there are also less intrusive ways of collecting information about how good a phone call was. Those are generally called "mean opinion score" (MOS), and they are in the range between 1.0 (completely useless) and 5.0 (excellent). The score mostly depends on the round trip time for the RTP packets, which has a huge impact on how echo is perceived, the packet loss which obviously at times makes it hard to understand and stuff like complete packet loss, one way audio and other disastrous events.
The PBX tries to calculate a MOS after each call. If RTCP-XR is available, the score us usually a lot more precise than for calls that have only general RTCP information in it. That score makes it into every call detail record (CDR), and is usually stored along side other information like when and who called.
The MOS also makes it into the statistics for the system, for the trunk and for each extension. When you log into the PBX web interface and look at the system graphs, at the bottom you can see an overview about the MOS of all past calls. With version 58.0, we have introduced an important upgrade of that graph, which makes it even easier to see how the overall MOS of the system is looking like.
In the old system, the graph was essentially honoring the presence of MOS in certain areas at certain times. It would not make any difference if you have one unhappy user and ten thousand happy users. That obviously was not good enough, so that we changed that to honor the amount of calls in the area as well. The new graph now gets darker the more calls are in the area and stay light when there are only few calls there (see below). 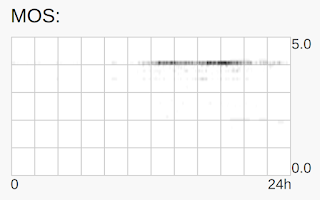 In the screen show above there were obviously a lot of calls in the 4.1 MOS area, which are typically G711 calls. A few calls are in the lower area, but not to a degree that we need to be concerned about. The graph spans a period of 24 hours, with the last call being on the right side. We took this screenshot around 9:00 PM, you can see that since the morning when activity picked only a few calls had a less-than-perfect quality.
This is not a very busy system; if you have graphs with a lot more activity I would be happy to share them here. Other systems might have a more widespread quality range, especially if there are several codecs at play and users are distributed all over the world, with small and large delay between the endpoints and the PBX.