The Vodia PBX has the possibility to perform offline paging. Usually this is done by first recording a message from a phone by calling the paging account. Then upon hangup, the PBX will create the page, play the message and then delete the WAV file. This is useful in environments where live playback creates an echo or is otherwise inconvenient.

In many cases such manual recording of a message is not convenient or possible. For example when generating automatic announcements at airports, it is much easier to use a script that puts the right audio files together and then sends it to a paging device. We have already added that possibility back in 2011, but over the time it seems it got a little rusty and forgotten.

With the new REST API, it made sense to sugarcoat the offline paging one more time and make it possible to trigger a page with a single POST request. The new API call will look like this:

When the PBX receives that request, it will schedule this request for immediate playback. As soon as the paging account becomes available from potential previous scheduled messages, it will start playing back that new WAV file. The page account needs to be in mode "play recorded message" as shown in the screen shot below. 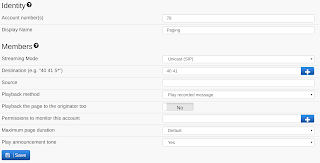 The new API call will be available in version 58.3 and onward with builds dates after today. The WAV file has to be in 8 kHz, 16 bit/sample as usual.